Many of us still remember the Netflix’s client experience fiasco — the company first abruptly raised the fees of its DVD services by more than 60% and then tried to split the streaming and DVD services into two separate websites to further inconvenience subscribers. As a result, the stock price plummeted from around  $300 to less than $80 within just a few months. 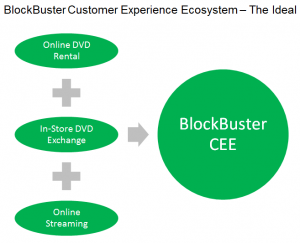 Blockbuster, the chief rival of Netflix, at the moment had a good shot at taking advantage of the missteps of Netflix, who broke down its own customer experience ecosystem or CEE by undermining the DVD rental experience. But Blockbuster’s failure of integrating its online and offline client experience made it forfeit this great opportunity.

Seeing the Netflix crisis, BlockBuster enhanced its existing Total Access package, which already included online DVD exchange and in-store exchanges (users can exchange their online rentals in the stores for other DVDs for free), by including video streaming in the package, and named the enhanced version Blockbuster Movie Pass. All of a sudden, with three client touch points integrated in one subscription, Blockbuster looked like a superior alternative to Netflix, which lacks the in-store touch point.

The concept was great as it promises ultimate convenience to users, and that’s why I signed up for Blockbuster Movie Pass and cancelled my Netflix subscription.

Well, it turned out to be a far less satisfying experience due to the fact that Blockbuster had closed many of its stores in the San Francisco bay area, including a few close to where I live. That made in-store exchange a moot point. On the other hand, Blockbuster did have a few kiosks near my home, called Blockbuster Express. The kiosks work the same way as Redbox – you can rent DVDs in an ATM-like setting located in local stores and malls – convenient and less expensive to operate than the full store.

However, Blockbuster’s Movie Pass and Total Access packages do not allow users to exchange DVDs rented online at those kiosks. Given that there’re fewer and fewer stores around, not allowing users to take advantage of the kiosks as a substitute of the in-store DVD exchange is a big missed opportunity. 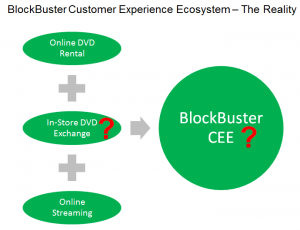 This is yet another example of poorly managed CEEs. While the notion of those service packages is very promising, Blockbuster fails to truly provide a customer experience that bridges the online and physical worlds. A CEE failure like this will almost certainly weaken the already fragile business going down the road.